Andrew VK2UH the VK2 Association Manager provided advanced notice of SOTA MTs intention to authorise VK2 qualifying summits on Sunday 1 September 2013 at 0000 UTC.  Local time is 10:00 am which works in our favour by providing time to get to a summit before 0000 UTC.  Congratulations Andrew on bringing this event together with very little notice and thank you for coordinating many months of VK2 regional surveying work undertaken by passionate SOTA volunteers. 48 hours prior to the launch I liaised with Ian VK1DI who suggested I try Mt Cowangerong VK2/ST-001 in the southern tablelands.  Ian had plans to activate South Black Range VK2/ST-006, 26 km north-north-east from Mt Cowangerong.  Both summits are located in the vicinity of Tallaganda National Park, I have a good feeling the summits in this NP will be easier to activate than the summits in Namadgi NP ACT. Mt Cowangerong hosts the primary weather radar for the A.C.T.,  NSW Southern Tablelands and the NSW South Coast, with coverage extending across the Monaro region through to the Victorian border.  The weather radar is known as Captains Flat Radar.  The radar dish is situated on a 22.35m cylindrical tower at a height of 1,386 metres above sea level. The route to the Firetrail is via Captains Flat township to Captains Flat – Braidwood Road.  Parked the car at the beginning of the track and walked 3 km to the summit.  The vertical gain from the start of the track is 242 metres. 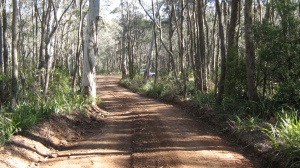 car park 3 km from the summit 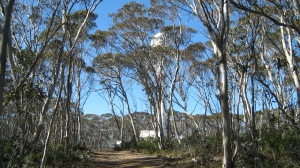 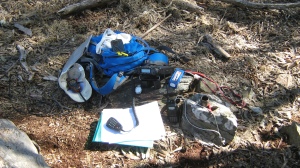 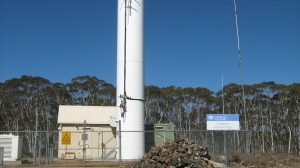 There is an issue with S8 QRM which cycles every 5 minutes or so and lasts for about one minute.  The FT857D digital filtering knocked down the noise to S2.  It will be interesting to see how the FT817 handles the noise.  Activators have options to move away from the compound which may help with noise reduction. 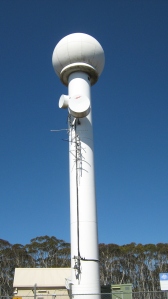 Fantastic beginning to the launch of SOTA in VK2.  I am looking forward to heading back to Tallaganda NP for 2 more summit activations.