Tuesday 30 December 2014.  12 months ago to the date, Andrew VK1DA and I activated Mt Kosciuszko VK2/SM-001 Australia’s highest mainland peak.  Today 12 months later I am heading back to the Snowy Mountains to activate Mt Perisher.   In winter Perisher is at the heart of Australia’s snow winter playground.  Today the Bureau of Meteorology (BOM) is forecasting very strong winds for the Snowy Mountains region with predicted wind gusts at 110 km/h (68 mph), I dressed appropriately.  🙂

The drive from Canberra is 2 hours via Cooma and Jindabyne.  Parked the car at the Alpine Eyre Cafe next to the Eyre T-Bar lift off Kosciuszko Road.

The wind direction was from the north-west whereas my approach to the summit was from the south-east.  I didn’t feel the full effects of the wind until I was with 200 metres of the peak.  My aim was to make the summit Trig for a photo but I found myself being pushed back by the force of the wind.  I had no intention of operating from the Trig so I descended 15 metres and found shelter from the wind close to a communications hut.

Ascent (blue track log).  Rod VK2TWR recommended I follow the Eyre T-Bar lift (not operating) to the summit.  Another option is to climb to the summit via a maintenance track following the main Perisher chairlift which adds a further 500 metres to the ascent. (see pictures)

Descent (red track log).  I retraced the Eyre T-Bar route to find an overgrown 4WD maintenance track around the 1880 contour line within 400 metres of the start point.  This maintenance track is visible using Google Earth, I should have followed this track for part of the ascent.  I will do that next time. 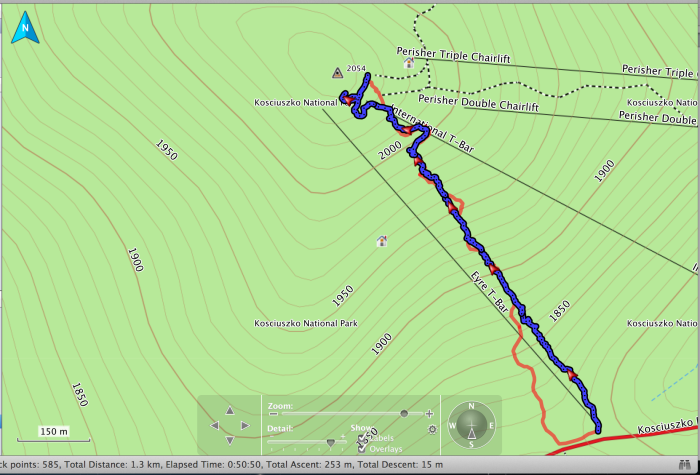 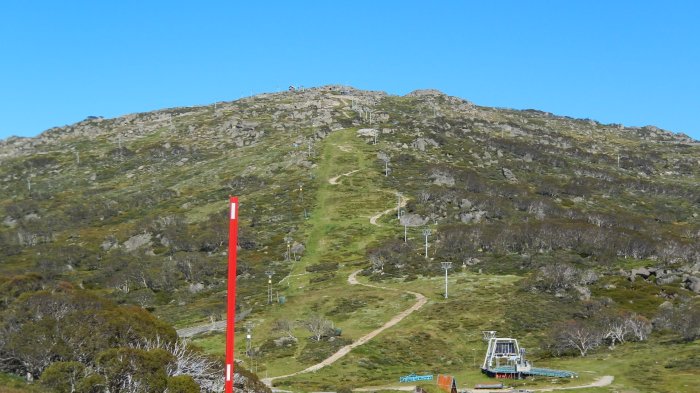 Actual route: I followed the Eyre T-Bar lift through knee-high alpine grasses and shrubs.  Wearing gaiters for protection and taking my time, I didn’t see any snakes. 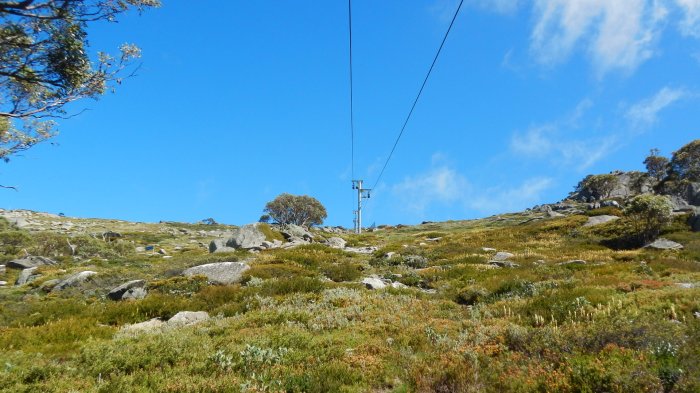 view north-west looking up to the summit

400 metres into the climb, view down to Kosciuszko Road.

On the summit.  Found a tall 50 mm (2 inch) square galvanized steel pole to support the squid pole.  Raised the squid pole to 5 metres, wind gusts would have broken the squid pole at the full height of 7 metres.  No issues with March Flies they too were sheltering out of the wind.     Yeah! I have the summit to myself unlike the popular overrated Mt Kosciuszko peak, only 200 metres higher than Perisher.  Yes not a single person the on the summit other than me!  😉 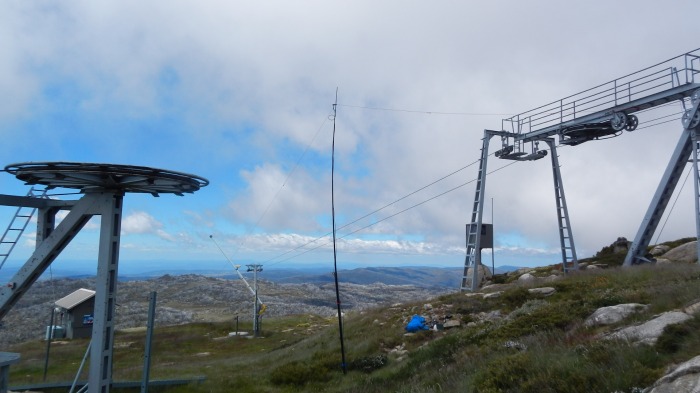 Tried 40m for 50 minutes where band conditions were average.  34 chasers in total including two Summit to Summit (S2S) contacts with Peter VK3PF on Mt Glenrowan VK3/VE-230 in the Warby-Ovens Ranges National Park and Nick VK3ANL on Mt Buller VK3/VE-008. 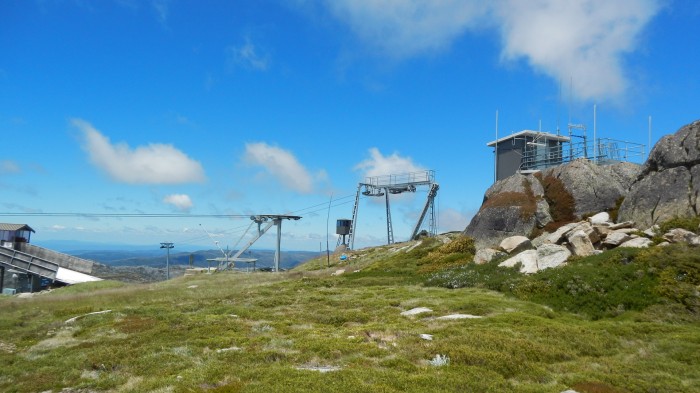 Packed up at 12:20 local, headed back down the mountain to the Alpine Eyre cafe for a coffee and a bite to eat.  Despite the strong wind gusts I had a good time on the summit, I will be back to Perisher in March 2015 for another 10 points and a photo at the Trig.  🙂