During the week I posted a note on the SOTA reflector seeking interest in summit to summit contacts between Australia’s Capital Territory (VK1) and keen SOTA activators in Europe on Friday 13 March 2014, yes it’s  Black Friday.  I received three firm responses from Mike 2E0YYY in the UK, Ed DD5PL in Germany and Herbert OE9HRV in Austria.   Would myths and superstitions around Friday 13th hold true or would the 20m band open between VK and Europe?

Friday 13 March 2015 my lucky day.   To keep the black cats away I have my 4 leg SOTA companion Harry, I don’t have a mirror on me and there are no ladders to walk under so I’m expecting a good result.  🙂

The climb to the summit starts from Long Gully Road, a 100 metre ascent over 1.5 km taking 20 minutes.

Forget Black Friday myths and superstitions, at 06:35 UTC 20m opened with a bang, first contact in the log was Herbert OE9HRV/p in Austria on OE/VB-155 Bratschenkopf with a 5-8 report on 14.317 MHz.  Interesting, Herbert’s signal had an echo meaning the signal path was a combination of long and short path or his signal passed around the world twice.

Just as I moved to 40m to work VK chasers, Sergei RV9DC in Russia posted a spot on SOTAWatch asking me to QSY to 14.310 MHz, Sergei was listening to my S2S contact with Herbert.  I had every intention to return to 20m at 0700 UTC and thankfully I did work Sergei later in the evening at 0808 UTC.  😉

Summit to Summits contacts went as planned, Mike 2E0YYY and Dave G4ASA both on G/TW-005 Normanby Top in the region known as Tees to the Wash, made the long path distance at 0754 UTC, signal reports were 5-7 and 5-5.   Later at 0810 UTC and with headphones on, Ed DD5PL on DL/AM-180 Berndorfer Buchet in the German Alpine region broke the radio silence for a  3-1 to 4-1 report.  Thanks Ed for a new unique summit and the chance to complete the DL association.   Terrific S2S contacts thanks Herbert, Mike, Dave and Ed.

My SOTA gear:  Yaesu FT-857D operating at 40 watts into a link inverted V dipole supported by a 7 metre squid pole.  The rig is powered by 4S 4.2 Ah LifePO4 batteries.  I use an iPad with an internal Telstra SIM and SOTA Goat to monitor spots.

Two pictures taken on the summit and an extract of my activator’s log below.  Thanks everyone, Friday the 13th was my luck day.  🙂 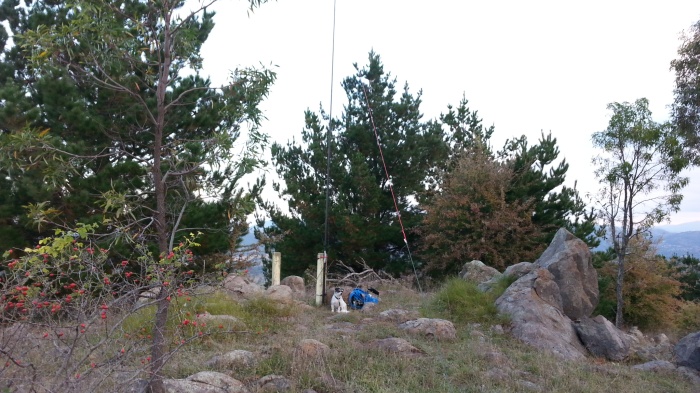 One thought on “SOTA – VK1 Isaacs Ridge to Europe”